Although the roots of progressivism began with formative progressives (see Blog: Progressive Movement Part I), their progressive ideas did not begin to really spread in America until incremental progressives (those who seek progressive change through small steps) began to be successful in taking the ideas out of the abstract and incorporating them into law and the structures of government.  Progressive ideology, is characterized by the following traits:

Incremental progressives desire to effect the changes they seek by using the established channels of government.  In many cases, foreign progressive philosophies were introduced and justified to Americans because of the existing problems and corruption in business and politics.  Some of the progressive “solutions” to these problems were implemented through the amendment process as with the income tax and prohibition, while other structural changes, such as programs like Social Security, were passed by Congress during a time of economic crisis.

To understand the march towards progressivism, one must understand the Gilded Age (1870-1900) or those years preceding the 20th Century (see Blog: The Prosperity of the Gilded Age).  This was a period of time where free market capitalism grew the economy; industry and business boomed across the country.  Some of the wealthiest Americans to ever live made their fortunes during this period – Carnegie, Rockefeller, and Vanderbilt to name a few.  Ironically, even though both the average poor man and rich man became richer (the poor man saw his real income double during this 30 year period), progressives exploited the differences of income/lifestyle between them.  This disparity was declared by progressives as “unjust” and “unfair” and a fundamental flaw in the capitalist system.  Therefore, towards the end of the 19th Century and the beginning of the 20th, the justification for greater economic equality became an increasingly powerful political tool.  To gain popularity (and votes) from the average working man, incremental progressives sought political advantage by emphasizing the differences between the rich and poor in America to create class envy.  Politicians quickly discovered that they could build devoted generational voting blocs by creating generational dependents.  Hence, instead of looking like the modern-day sharecroppers that they were, politicians were able to assert that they were fighting for the “little guy” – as with Theodore Roosevelt’s Square Deal, or  FDR’s New Deal.  In the name of “social justice,” progressives in both the democrat and republican parties amended and circumvented the Constitution to increase the federal government’s power and its spending all in the name of “helping” the less fortunate.  Progressive historian, Richard Hofstadter, states with some apparent pride:  “The men and women of the Progressive movement must be considered…to be pioneers of the welfare state.” (Hofstadter 15)

The Populist Movement and Birth of the Progressive Movement

The progressive movement is often seen as the urban counterpart to the rural populist movement.  Although the Populist movement and its political party (sometimes known as The People’s party) was short-lived, it had a profound effect on the transformation of the Democrat party.  In 1900, the populists demanded “…the public ownership and operation of those means of communication, transportation, and production which the people may elect, such as railroads, telegraph and telephone lines, coal mines etc.” (Beveridge 568) The Populist party stated in its 1892 platform that “…the power of government—in other words, of the people—should be expanded (as in the case of the postal service) as rapidly and as far as the good sense of an intelligent people and the teaching of experience shall justify, to the end that oppression, injustice, and poverty shall eventually cease in the land…”  In 1892, the Populist candidate for President of the United States received more than a million votes, and fifteen Populists were elected to Congress.  By 1894, the number of Populist voters increased by 40%. (Ganley 19)  Historian Richard Hofstadter asserts: “Progressivism incorporated the heritage of Populism…” (Hofstadter 7)  This may be an understatement.  While some Democrats of the 1890’s believed they were co-opting the Populist movement, it would be more accurate to say that the Populist movement swallowed the Democrat party whole, digesting few, if any of the principles that only a few decades earlier once defined the Democrat party, namely fiscal conservatism, state rights and limited government.  During this period of progressive transformation, a supporter of former President Grover Cleveland lamented, “The Democratic party, as we knew it, is dead.” (Merrill 207) 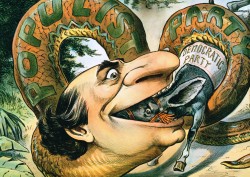 By 1896, Democrats saw an opportunity to ride the Populist wave and capture its growing energy and momentum and incorporate it into the Democrat party.  In “…1896 the Populists let themselves be taken over by the Democrats under William Jennings Bryan.  Although this merger consigned the Populists to oblivion, many of their demands were achieved within the next two decades in the progressive movement.”   (Ganley 19)

The Populists had sought for the direct popular election of US senators (instead of by state legislators) which in practical terms, weakened each individual state’s influence with the federal government.  Although this Populist position was initially ignored by both the Republicans and Democrats, it gradually gained political traction.  In 1913, under the Woodrow Wilson administration, the 17th Amendment to the Constitution was adopted making the popular, democratic election of senators a reality.   While progressives in both parties amended the Constitution, they have also increased spending on various social programs.  In 1903, US government expenditures as a percent of Gross Domestic Product, was only 6.79% by 2010 that percentage increased to 40.91.% of GDP.

The impact and influence of the progressive movement in America cannot be isolated to one party or one generation 100 years ago. Theodore Roosevelt was a Republican, but he was also a progressive.  In fact, in 1912, he ran for a third term as a presidential candidate for the Progressive Party, which he founded.  Indeed, from a historical perspective “…the reforms of the Progressive Era established a basis and a precedent for further reforms to be passed when the need for them was felt.  Franklin D. Roosevelt’s New Deal owed a heavy debt to its Progressive forerunners both for moral inspiration and for some of its administrative devices.” (Hofstadter 15)  In many cases, FDR did not need to create foundational justifications to build new programs; no, he simply needed to build upon existing structures laid by earlier progressives like Theodore Roosevelt and Woodrow Wilson.  As government offered ever-larger forms of financial “assistance,” Americans, in many cases, came to expect such help — and worse, became dependent on these programs.  The hard reality is this:  once a program like welfare, Social Security or unemployment insurance is offered, it is very difficult for any politician to have the political courage or public support required to reduce the federal spending on, or to eliminate the program – regardless of the long-term moral and financial consequences for those Americans who are dependent upon it.  Ultimately, regardless of the incremental progressive’s “good” intentions to bring equal prosperity to all, in the vast majority of cases, the obvious reality is that these unconstitutional programs have created generational dependence and an unsustainable debt which enslaves future generations of Americans to countries like China and cripples domestic economic growth.

Finally, it is important to recognize that progressive historians continually describe their movement as an “evolutionary” advance because they desire to paint the movement as a natural and inevitable process forward.  But in truth, the changes ushered in by the progressive movement were no more natural or inevitable than the selective breeding that was required to create the Chihuahua.  This “helpless” dog did not inevitably or naturally spring from a pack of wolves — it was the result of man’s incremental and intentional manipulation over many years.   Likewise, the incremental progressive movement has been successful in breeding a similar “helplessness” in the strength and capacity of millions of Americans to be self-reliant because they have been led to believe that they are unable to get through life, or obtain an education, or provide basic needs for themselves and their kids without the government either leading the way or granting its permission.  However, the future of America is yet to be written and the question of our day remains:  What will Americans allow the progressive movement to selectively breed during our generation?  We would be naïve if we believed that any version of socialism, regardless of its scope, was something as benign or as weak as a Chihuahua.