NOTE: This is a reprint of an article written by Derrick G. Jeter http://derrickjeter.com/2011/05/13/founding-fathers-friday-button-gwinnett/ 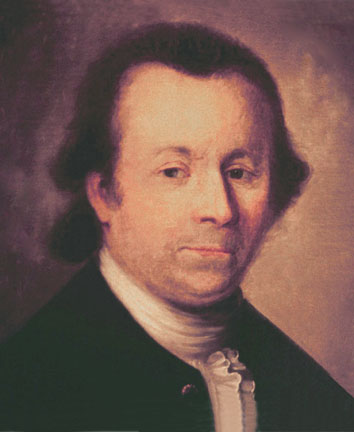 e majority of Declaration signers lived lives of accomplishment and honor before and after the summer of 1776. Some died early in life, some lost property because of their patriotism, and some served as prisoners of war. But none had the tragic life of Button Gwinnett.

Gwinnett was born in England to a Welsh clergyman. His name came from his godmother, Barbara Button. If Gwinnett had succeed in some profession in England he probably would never have sailed for America and signed the Declaration. But he failed in England. Borrowing money to make a fresh start in the colonies, Gwinnett stepped off the boat in Charleston, South Carolina, secured a loan, and opened a mercantile business. It failed.

With mounting debts in England and South Carolina, somehow Gwinnett was able to borrow more money to give him another start in Savannah, Georgia. He failed there too.

Undaunted, Gwinnett again finagled a sizable loan of £3,000 to buy a large track of land, including the island of St. Catherine’s, just off the Georgia coast. He acquired slaves to work the plantation and build him a house. But Gwinnett grew nothing . . . except debts! No longer able to keep his creditors at bay, they seized his lands as payment. It was only out of kindness that they allowed Gwinnett and his family to continue on in the St. Catherine’s home.

It seemed like the only thing that Gwinnett succeed at—besides being a smooth pitchman and accumulating debts (two qualities ripe for a political career)—was politics. Initially, he was leery of breaking with England—he was, after all a native Englishman and he lived on an island, making his family and home easy-pickings for British ships. In the words of an early biographer, Gwinnett saw an open rupture with England as “highly problematic . . . [and] looked upon the proposition with disfavor, as one fraught with danger and many evils.”

That was before he fell under the charismatic spell of Lyman Hall.

Elected to represent the St. John’s Perish, along with Hall, at the Second Continental Congress in 1775, Gwinnett traveled to Philadelphia as a patriot. The following year, the colony was foursquare behind Congresses efforts to either negotiate a settlement with Britain or to declare independence, and Gwinnett was sent back to Philadelphia.

After voting for and signing the Declaration of Independence, Gwinnett returned home as a member of the state’s Constitutional Convention. When the governor died the convention elected Gwinnett as the acting governor. He should have been satisfied—but he wasn’t. Again, his earlier biographer: “The civil honors, so rapidly and lavishly bestowed upon him, excited his ambition, and while he was a representative in Congress, he aspired to the possession of military honors also.”

Gwinnett offered himself as a candidate for the office of brigadier general of the state’s militia, though he knew nothing of military matters. His opponent was a seasoned military man, Colonel Lachlan McIntosh. The state wisely chose McIntosh. But Gwinnett chaffed under the decision—and retaliated. He accused McIntosh’s brother, George of treason, he removed McIntosh’s allies from the executive council, and he raised troops for a self-appointed campaign into British-held Florida—it failed.

Called before the legislature, Gwinnett (as he was known to do when needing money) put on the charm and wiggled his way out of trouble. Nevertheless, his colleagues were wise enough not to install him as Georgia’s official governor. McIntosh publicly mocked Gwinnett mercilessly for his ill-fated foray into Florida, calling him a “scoundrel and a lying rascal.” Foolishly acting out of rage, Gwinnett challenged McIntosh to a duel. They met the next day. And though both men were shot, Gwinnett was fatally wounded. Hit in the leg, he developed gangrene and died a few days after the duel.

Gwinnett was forty-two when he died in 1777. He was buried in a poorly marked grave in Savannah, in what is today Colonial Park Cemetery. He was the second signer to die, after John Morton of Pennsylvania.

Almost one hundred and seventy-five years later, in the 1950’s an amateur historian claimed to have rediscovered the long forgotten resting place of Gwinnett. His remains were exhumed and send to the Smithsonian Institute for evaluation. A decade-long battle Augusta and Savannah ensured over Gwinnett’s bones. The city of Augusta demanded the bones be buried under their Signers Monument, which already contained the remains of Lyman Hall and George Walton. Savannah refused to turn the bones over, arguing that it would construct its own memorial. Meanwhile, Gwinnett rested in a wooden casket in the guest room of the amateur historian. When the dust settled, Savannah took charge of the bones and reburied Gwinnett in the original cemetery in the early 1960’s.

By the way, Gwinnett’s fear about St. Catherine’s Island came to pass. During the Revolutionary War, British ships fired upon the island and landed soldiers. Gwinnett’s home was ransacked. History has lost any record of what became of his wife and children. Today St. Catherine’s is privately owned as a nature preserve. An old house of lime, seashells, and sand is all that remains of Gwinnett’s family home.

With historic irony, the signer who never completely paid off his debts has one of the most sought after and valuable signatures in history. His thirty or so authentic signatures, most of which are held in museums or private collections, are so rare that when one became available at auction it sold for $150,000. Not a bad price for the scratch of a pen.